Hidden behind Euston station is an interactive group game truly unlike anything we’ve ever experienced here at Antidote. Last night Jo and I arrived with two others to take part in what Hint Hunt deliberately vaguely describe as a ‘new simple and fun live escape game.’ Having somewhat blindly signed up to play, coaxed into doing so by positive reviews and the allure of a mysterious evening of fun, we stumbled into a rather normal looking shop front on Eversholt street to be greeted by some equally confused-looking Hint Hunt players.

Ushered into a reception room, we were informally introduced to the rules of play by three hosts who would act as ‘big brother’ style guides for each of the three separate groups as they explored their Hint Hunt rooms. The next 60 minutes would involve cryptic puzzles, codes, clues, red herrings and teamwork, the aim – to solve the mystery and in doing do unlock the door to our freedom. 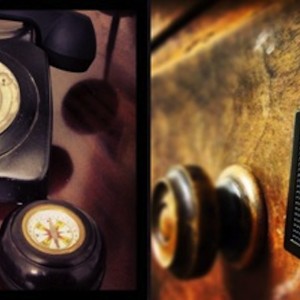 Brilliantly conceived and realized through on screen instructions, life-like props and a room that on first appearances resembles any generic office out there, the Hint Hunt experience is both fun, challenging and very much in the participants hands to make of it what they want.

Initially we were a little clueless (excuse the pun) as to how we were meant to go about solving the whole challenge but we soon cottoned on to the fact that to unlock and decipher the various locks and puzzles hidden in the room we simply had to be curious and hunt high and low for numbers and information. The on screen instructions helped steer our group in the right direction and the hour was punctuated with hilarity, panic and fun.

Might Hint Hunt have benefitted from a more formal introduction/one in keeping with the ‘murder mystery’ feel? Perhaps yes, but that’s the actor in me talking… But in all seriousness, Hint Hunt is a golden way to spend a grey Monday eve and one all Londoners should try and experience. http://hinthunt.co.uk